[WORK IN PROGRESS] A guide to learning, implementing and using PDDL. (Updated Weekly)

Getting Started with PDDL

NOTICE: This is a work in progress and is being updated weekly.

Welcome to LearnPDDL, a short guide to getting started with using PDDL.

This guide is designed for first-time readers, people who need refreshers and others, like myself, who sometimes need some syntax sanity-checking.

If you read anything here that you believe needs improvement, contribute to it on GitHub.

PDDL one of the few languages designed for the purpose of creating a standard for Artificial Intelligence (AI) planning. It was developed in 1998 and was introduced at ICAPS, with improvements and extensions being built into it over the years [1].

The most popular of PDDL used today are PDDL2.1, which is an extension to PDDL for expressing temporal domains [2]; PDDL 3 [3] which adds trajectory constraints and preferences to PDDL 2.1, and PDDL+ [4] which allows modelling mixed discrete-continuous domains in PDDL.

You can use your own text editor, but I would recommend using Sublime Text with Package Control. This way you can make use of the myPDDL package, which will give you syntax higlighting.

Before we start writing PDDL, we need to understand what how to model a “world” in PDDL.

A world is described by a set of states, each containing a list of facts and/or objects. A world begins with an initial state, and is governed by a set of rules and constraints that limit which actions can be taken in each state, and each action generally represents a transition to a different state.

There are certain things we need to keep track of in the “world”.

First thing you need to know, PDDL files usually have the extension .pddl.

There are two PDDL files you need to learn the syntax of:

The domain file establishes the context of the world. It determines what sorts of details the states can include (predicates), and what can we do to move between states in the world (actions).

The basic syntax of a domain file is:

where <domain-name> is the name of the world.

Both predicates and actions will become clearer in examples below.

The problem file represents an instance of the world we established in the domain. It determines what is true at the start of the plan (initial state), and what we want to be true at the end of the plan (goal state).

The basic syntax of a problem file is:

where <title> is the title of the problem file and <domain-name> refers to the name of the corresponding domain file. 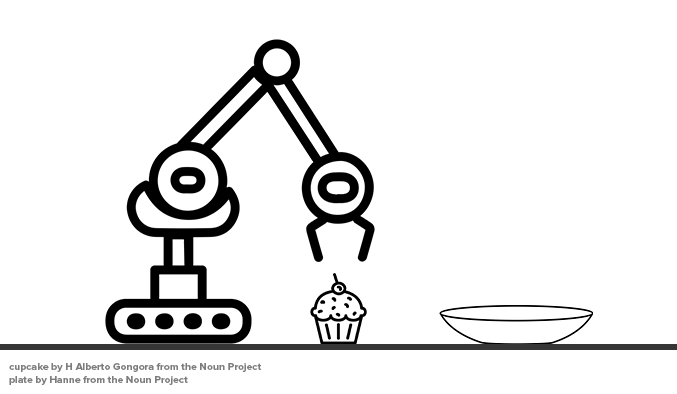 Let’s imagine we have a robot gripper arm, a cupcake and a plate. The gripper is empty, the cupcake is on the table and we want to put the cupcake on the plate.

Before we model this in PDDL, let’s look at the components of the PDDL problem:

First we define the domain.

Then we define the objects: plate, gripper, cupcake. We will also mark the cupcake and the arm as locatable, a little hack to help us query the locations of these objects using a predicate we’ll create later.

We also need to define some predicates. Is the gripper arm empty? Where is the cupcake?

We’ll also have to define actions/operators. We need to be able to pick up and drop the cupcake, as well as move the arm between the table and the plate.

Put all the above into a file, and you have a domain file!

Now we’ll look at the problem file. We’ll start by letting it know which domain it’s associated to, and define the objects that exist in the world.

Then, we’ll define the initial state: the gripper is empty, the cupcake is on the table, and the arm can move between both.

Finally, we define the goal specification: the cupcake on in the plate.

Put that all together and you’ll have the problem file!

If you run this using OPTIC, you’ll get this solution:

Here are a few tasks to make it more complex and enforce your understanding.

If you want to check out something a bit more complex, check out the driverlog domain.

If you’re a first timer, don’t venture into this part until after you’ve fully understood the basics.

You can actually give actions durations to work in temporal domains.

Each condition and effect is given the time at which it’s supposed to happen.

There are a few types of temporal constraints:

Below is an example of the (move) action from our previous example transformed into a durative action.

If you’d like to be listed as a Contributor, make a pull request.